What is Natural Wine?

Natural wine is produced with traditional methods and without the heavy chemical, thermal and mechanical processing of conventionally produced wine. Furthermore, the term ‘natural wine’ applies only to the process of vinification, which covers solely what happens in the cellar after harvesting, and not what happens in the vineyard. So far, so good, but look into the matter a bit more in-depth and things start to get muddy. Why? Because natural wine, unlike biodynamic and organic wine, is not officially regulated. The absence of official legislation, and a lack of consensus about the definition of natural wine among the producers themselves, create a loophole that potentially allows natural wine to be produced from grapes that are neither organic nor biodynamic.

This paradoxical scenario actually happened in France, where there have been cases of ‘natural wine’ made from non-organic grapes contaminated by synthetic products. Following an uproar (Quel scandale!!) the French Ministry of Agriculture, together with the Anti-Fraud Office (OLAF) and the National Institute of Origin and Quality (INAO) teamed up to address the situation, and thus the first official appellation for French natural wine was created: Vin méthode nature. Other nations, including Spain and Italy, look set to follow suit.

Do we need a natural wine certification?

Certifications such as Organic or Biodynamic can be released by the European Union, by official national bodies, or by private associations of producers, national and international. These associations set out rules and regulations that members are pledging to follow, while also acting as inspectors. Demeter, the official certification body for Biodynamic agriculture, does exactly that. However, for many organic or biodynamic farmers the costs of memberships, certifications, and the lengthy bureaucracy they often entail, is often a financial and administrative burden they are not prepared to undertake, so they renounce certifications.

In the wine world too the debate about natural wine certifications has been ongoing. The idea is met with favour by some producers, convinced that the sector has grown enough to require formal guidelines in order to guarantee quality and benefit the consumer, and with less enthusiasm by others, who are not keen on reducing their independence as wine-makers.

Although there is a lack of consensus on a clear definition of natural wine among producers, many of them have joined forces and formed organisations such as VinNatur, Triple-A, Vini Veri and VAN Vignaioli Artigiani Naturali. These associations, often operating on an international level, set out guidelines, offer certifications and act as inspecting bodies to ensure rules are followed by all their members. However, reflecting again a lack of consensus on a formal definition of natural wine, their manifestos and rules, while similar to each other in intentions and goals, may differ on some tricky but important technical points, such as the use of sulfites (more on this later).

Though still sometimes misunderstood, natural wine is nevertheless tied with contemporary perceptions of healthy food and lifestyle, respect for the environment, a sustainable economy, and the value of traditions. This is in contrast with a growing perception of conventional wine as less authentic, contaminated and environmentally unsustainable.

In this context, the amount of information provided by the label becomes important as a guarantee of quality and ultimately as a factor driving consumer’s choice. Many wine-makers are actually demanding more clarity on labels and are pushing for appropriate legislation, even going as far as suggesting that labels should contain a list of all the chemicals added to the wine. This would advantage those producers who are investing in quality, as conventional wines often contain a surprisingly long and scary list of additives, potentially putting many buyers off.

While EU-regulated organic farming allows far fewer additives and sulfites than conventional agriculture, many producers feel that the EU limits do not go far enough and voluntarily adopt biodynamic principles on their own vineyards, choosing to adhere to stricter guidelines such as the ones set out by Demeter. In biodynamic farming, all chemicals are banned, except for sulfites, which can be used on the plant as a fungicide -though only in particular circumstances and in carefully monitored amounts- or added to the wine to stabilise it and prevent spoilage. 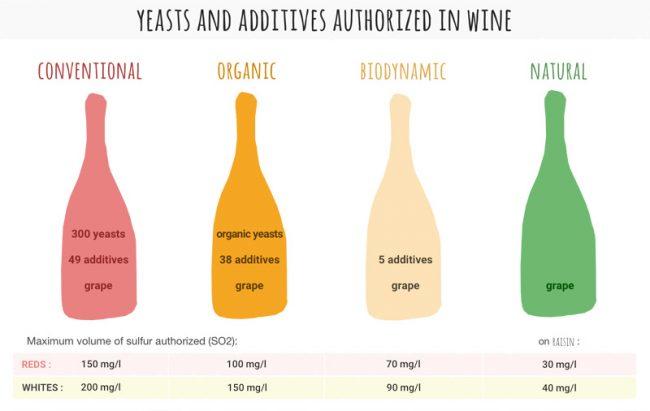 (Image used by permission of raisin.digital )

Renouncing the use of sulfites altogether is a brave move as wine is a delicate product and it can spoil. Not all wine-makers are prepared to take the risk; in fact, they are divided on the sulfite issue. Some are in favour of using small quantities in the cellar, while others are opposed to the idea. Those in favour of sulfites do not always agree on what stage of the vinification process should the sulphites be added. Before malolactic fermentation? Or only before bottling? Those not in favour of the use of sulfites may still find them on their wine, even if they have used biodynamically grown grapes. Could these producers still call themselves natural wine-makers?

So how do consumers know how many sulfites are present in their wine? Too often, wine labels are not very helpful, as current legislation allows for ambiguity. Many producers will, however, print ‘No Added Sulphites’ or ‘Low Sulphites’ on their labels, and some rare ones will even print actual figures.

While natural wine certifications are still not commonplace, winemakers generally agree on their common determination to produce wine that tastes authentic and can be part of a healthy lifestyle. To reach this goal, they have created associations of producers which set out common guidelines, monitor standards, and issue certifications. Some of these associations have successfully lobbied national institutions in France, which has become the first nation to create an official national natural wine certification.

Obtaining certifications often remains costly and time-consuming, so many producers decide to forgo them and to rely solely on their reputation (and some blurb on the label) to sell their naturally-produced wines. In the future, certifications will likely become more commonplace as the industry responds to the expectations of customers who are driving demand for natural wine and seeking quality assurance.